The success over at Americas Cardroom never ceases to amaze us. The recent news began with their $5 Million GTD Venom tourney this past July that ended with a huge $6,382,500 prize pool.

But if you thought that was all, think again! They just ran an even-bigger $6 Million Venom that ended December 11th. It lasted two weeks and there were four Day 1s to choose from.

The winner of the $6 Million Venom was galodoido13 and he’s now a millionaire. Remember, every Venom has a $1 Million guaranteed prize for first place. Here are the results:

Want more huge news? ACR just announced they will run their next Venom in six months (June 2020). It will then occur every six months after that.

The Venom buy-ins are each $2,650. That’s nothing to sneeze at no matter who you are.  However, you can get a seat for pennies on the dollar thru Satellites, Step Tournaments, Skip Tournaments and Spin to Get IN.

Visit Americas Cardroom for all the latest Venom information.

***check out this new message from Americas Cardroom!*** 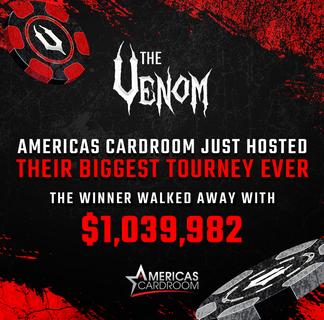